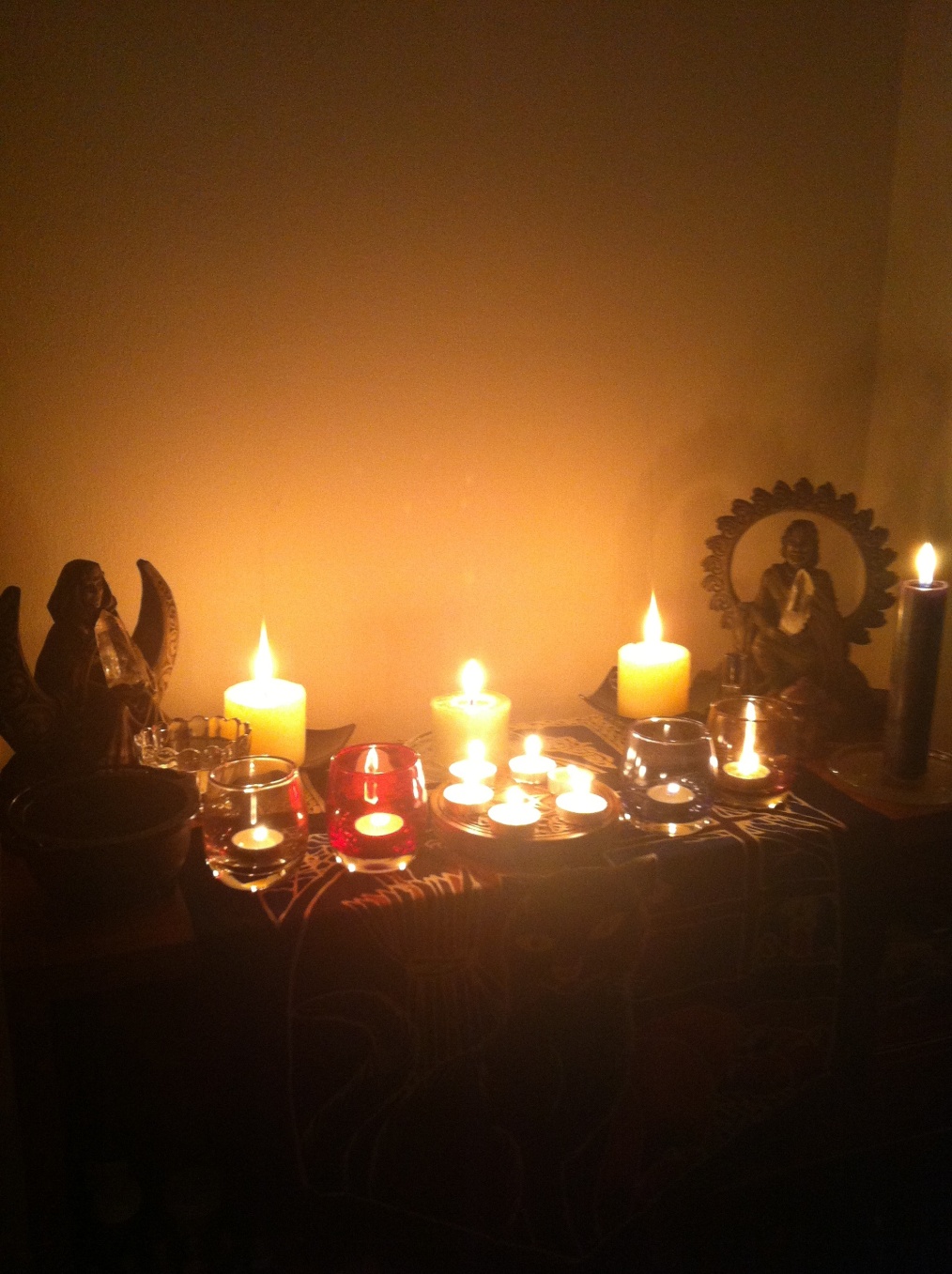 Samhain.  Its a Sabbat.  Another main spoke on the wheel o’ the year!

Well, different people will tell you different things.  Like all things in this blog I will only tell you what I think.  You are totally welcome to disagree!  Its totally cool if you think I’m full of shit!  You can absorb this information/energy or you can leave it for someone else.  That’s how things work 🙂

From all sensible research I have done (meaning physical reading and researching based on recorded history) there is absolutely no mention of a holiday like Samhain or Halloween anywhere until the 19th Century.

The ancient Celts of Ireland/Scotland/France/England did celebrate their New Year on November 1.  This would make October 31 New Year’s Eve.

As we know Romans conquered like .. everything.  So when Rome took over the Celtic lands (which lasted like half a century) some Roman celebrations were thrown into the mix.  One of these holidays was similar to the modern Memorial Day.  Simply a day to remember those that have died.

In like the seventh or eighth century a Pope (I don’t remember which one.  I want to say it was Gregory) made November 1 a holiday.  It was called (in archaic English) All Hallow’s.  Today its called All Saints Day.

So the night before All Hallow’s?  All Hallow’s Eve, of course.  This was then called Samhain then Halloween.

I think it is a huge mix of many cultures.

How do I celebrate Samhain?

Well while I do it quite simply.

I place a candle on my altar for each beloved dead.  This year there are 6 candles.

I anoint each candle and either whisper their name to the candle – or the person’s title.  This candle is then lit in their memory while I think of them.

I feel this kind of quiet time is important to continue the healing process.  Not only that but with our everyday busy lives often we don’t have time to stop and think about things that really mean a lot to us.

Rarely do we share our history/herstory with one another.  We don’t tell one another stories like we once did.

When my Beloved Dead candles have extinguished themselves I tell each person for whom a candle was lit that I love them.  I tell them I miss them.  I tell them that they are welcome in my home for the evening if they want to be there.  I will leave sort of like a group offering (a glass of wine, a chunk of freshly made bread) and thank them for being part of my life.

The next morning – the offerings made to my Beloved Dead are placed outside.  I then tell anyone who I feel is still present that they are free to return to their side of the veil.

I do not smudge.  I do not do any protection stuff.  Why?  Because I have only invited the people I have named.  I didn’t invite ALL spirits to my home or sacred space.  I do not need protection from any of my Beloved Dead.  I do, however, treat them with the same respect as a spirit as I did when they were living.

Song:  Daughter of the Elements

Choosing a Patron God or Goddess

Not everyone feels the need to choose a patron God or Goddess.  Some, though, feel called to do this.  A lot of what I will say in this post will probably not apply to anyone.  That’s okay.  I feel its never a bad thing to hear information.  You don’t have to agree, disagree, adopt or transmute any of it.

In my opinion all religions have ‘characters’ which are all basically the same thing.  They all share similar paths but the names have been changed.  I choose, to mix and match depending on who identifies with me.

But Jen if they are all the same person why does it matter which ‘name’ you choose to call them?

Well let’s say you have a favorite book.  A few years later that book becomes a film.  Its named the exact same thing.  The characters have the same names, but something is off.  Its because the person the producer/directer has chosen to play those characters aren’t how you had pictured these people in your mind’s eye.

That’s how choosing a patron God/Goddess is to me.

Why choose a patron God or Goddess?

I think it gives you focus.  It gives you a reason to focus on different aspects that you’d normally not pay attention to.

I devote myself to a different God or Goddess for a minimum of one year.  There have been years I have chosen to rededicate myself to the same God or Goddess because I don’t feel my work is done.  Its a way of improving aspects of yourself. I try to adapt their vibrations and energies to my life.

When I was young I pictured my Goddess as a ‘spider hag’.  It was an old lady who could take the form of a spider.  She was venomous but wouldn’t attack unless provoked (like most wild things.)

Later in life I learned about the Greek Pantheon and happened to put the name Hecate to my goddess.  Do I worship the ex-Titan Hecate?  Not really.  At least I don’t think so – but there are some similarities.  I happen to think if the energies of the deity I work with didn’t like me calling her Hecate I would have been corrected by now.  Perhaps this Goddess doesn’t have a known name and has just allowed me to call her Hecate because that is simply what is comfortable with me.

Choosing a patron God or Goddess can give you some strength and solace.  Its also a good opportunity to expose yourself to different paths that you may not be familiar with.  I hope to one day feel comfortable with Oshun and ask her to lend her aspects to my life but the time has not come yet.

Some Goddesses and Gods are more picky than others.  You can’t just say in your head “Yep I am now a devotee of Isis” and that be it.  That is not it.

You should be able to answer:

These may seem like stupid questions but there are people who say they are a devotee of a God/Goddess yet have never had a line of communication.  Gods and Goddesses will come in your meditations, dreams, while you’re typing a blog.  They will present themselves in different ways and its up to you to recognize it.

There are signs.  You’ll know them when you see them.  Once you have inner confirmation, allow yourself some time to debate.  If that God/Goddess is willing to work with you, they want you to be sure its what you want, too!

Who do you work with regularly and why?  How did you know they were right for you?

Posted in Gods and Goddesses

“I think I will Google how to do a spell”

If that thought has crossed your mind, STOP.

You do not need to do an internet search on how to do a spell.  There is no right way or any certain way to do any spell.  In my opinion, beginner witches shouldn’t be doing spells, honestly.  I feel that you need to have a personal relationship with your chosen deities before you start asking for assistance of things.  They need to know you’re serious.  They need to know you aren’t just going through a ‘phase’ and want to see if you will get what you ask for before you commit.

What is a spell?

Well a spell isn’t something that requires a list of exotic and expensive ingredients.  As a matter of fact – I get a bit insulted when I see ‘witchy stores’ offering spell kits.  I feel that when it comes to spell casting there should be no convenient alternative.  I don’t feel any spell should be offered in a zip loc bag for the low, low price of $19.99.  From a business point of view, I can understand why they do it.  However, I feel a better alternative would be to offer ‘make your own spell kits’ where a customer can pick a candle, an herb, an oil, piece of parchment, incense, and a crystal.  That’s just how I would do it if one day I live my dream of having my own ‘witchy store’.

A spell is simply a prayer.  A prayer that has been strengthened with other items.  Some spells are as simple as thinking of something really hard – or as elaborate as acquiring crystals, specific herbs, etching a candle, burning a special candle for 7 days … the list is endless. The bottom line is – all spells are a prayer with focused intent.

No.  You don’t.  Not unless you personally feel you must have those items to strengthen your intent. The more you do yourself for the spell, the more powerful it will be.  If you simply punch “love spell’ into  a search engine and write everything down word for word, gather the exact things the internet says to gather, do it at the time the internet said to do it – how completely pointless.  I imagine that for the God and Goddess hearing spells like this is like going and hearing a really bad cover band.

I can understand becoming stuck while trying to write a spell.  It happens!  But I personally feel that casting spells should be done once you have a personal relationship with your chosen deities.  That is because the human mind is very powerful.  The saying “you can do anything you put your mind to” is very true.  Anything you put out to the universe can be done.  Does it always happen?  No.  Why?  For the same reason that we aren’t all millionaires.  The potential is there.  Anyone could be a millionaire.  Yet we aren’t all millionaires.

Spells are the same.  We can all cast spells.  Should we?  No.

When is the best time to cast a spell?

When you aren’t angry.  When you aren’t sad.  When you are totally emotionally stable and have meditated on the focus of your spell for at least 48 hours.  Why?  Well this is to be sure that if your intentions aren’t entirely good that you have time to back out before its too late.  Sometimes we think we want things, but all too often we wish we could go back and change it.  In my path there is no repentance.  You will pay for your mistakes no matter how sorry you are for them.  Eye for an eye.

Can’t you only cast spells at certain times of the week/month/moon phase?

Some people think so.  There are people who believe that if you want to cast a protection spell it should be done on Thursday night between 8pm and 11pm in the New Moon with a black candle, a mirror, a piece of quarts while burning blue sage.  I, however, do not think this.

I think any time you need to cast a spell and you are in control of yourself – do it.  I am not entirely comfortable only doing things when I’m told by someone else they need to be done.  Sabbats are different.  Spells, I feel, are personal.  Rituals when done with a group/coven are less personal but still powerful.  I have never been part of a group that does spell work together.

I just heard about witchcraft and I want to cast a spell.

Have a conversation with your chosen deities every morning when you get up.  Tell your deities what you would like to focus on that day (example: let me have patience with co-workers today) and start from there!